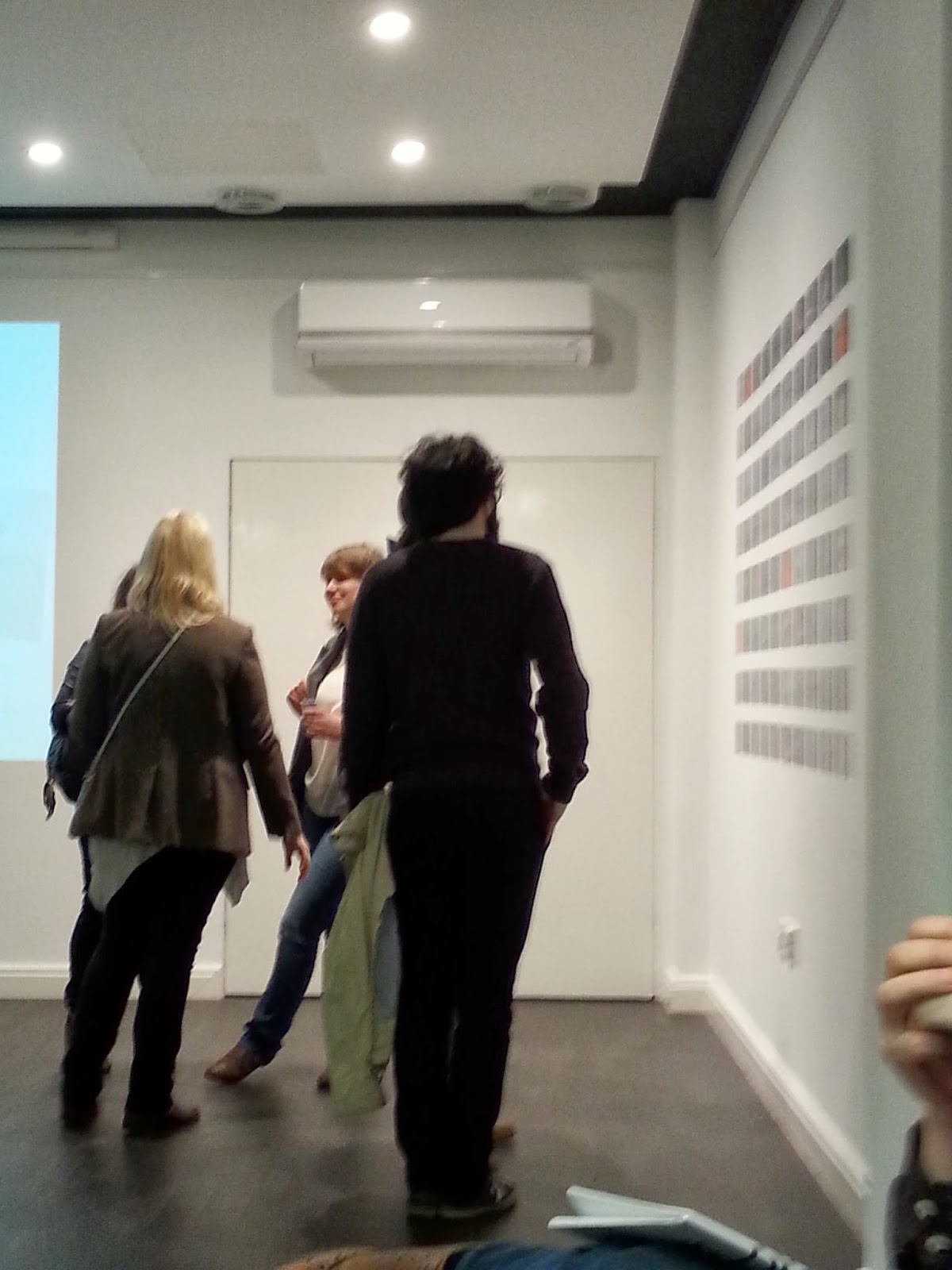 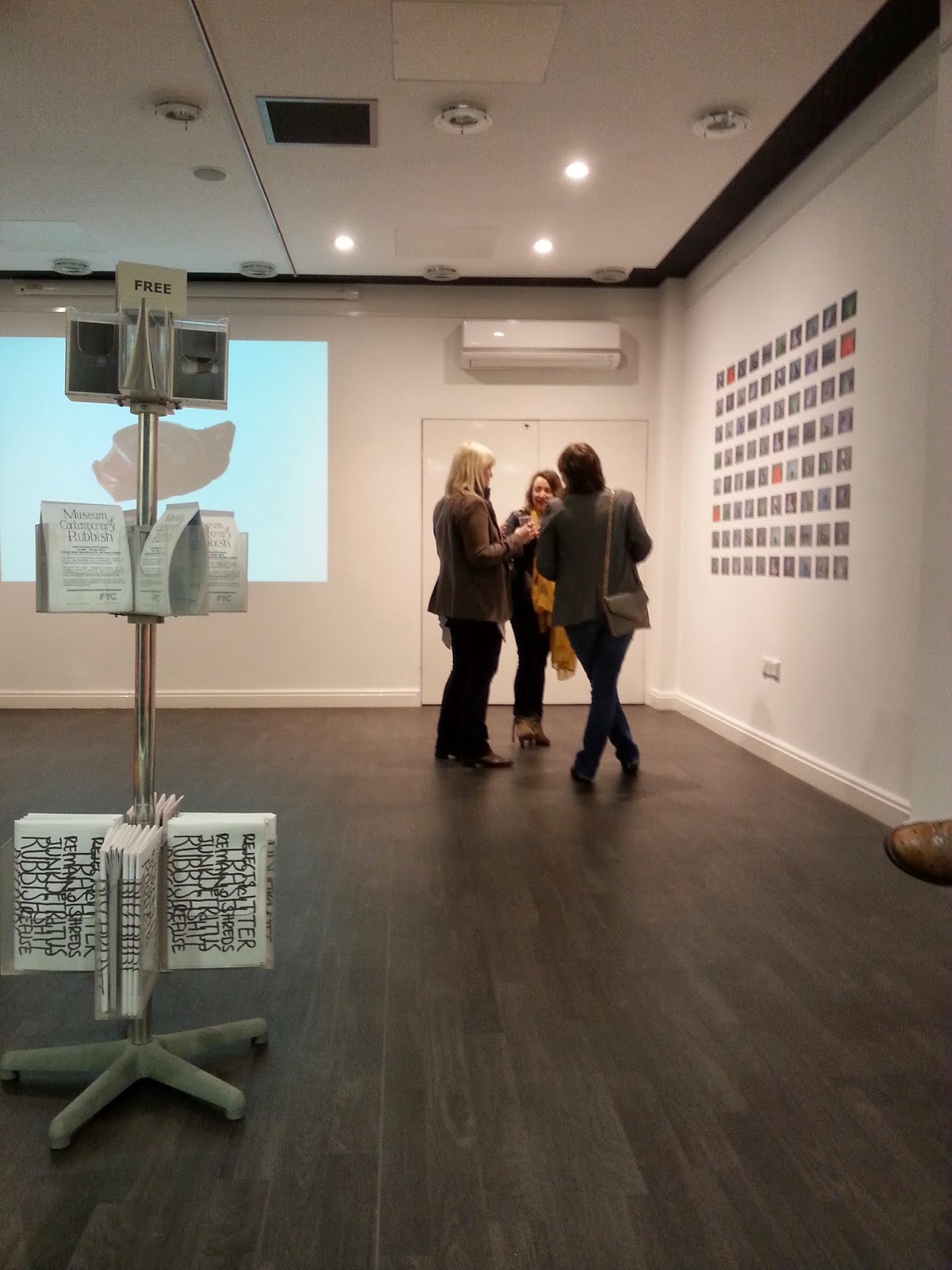 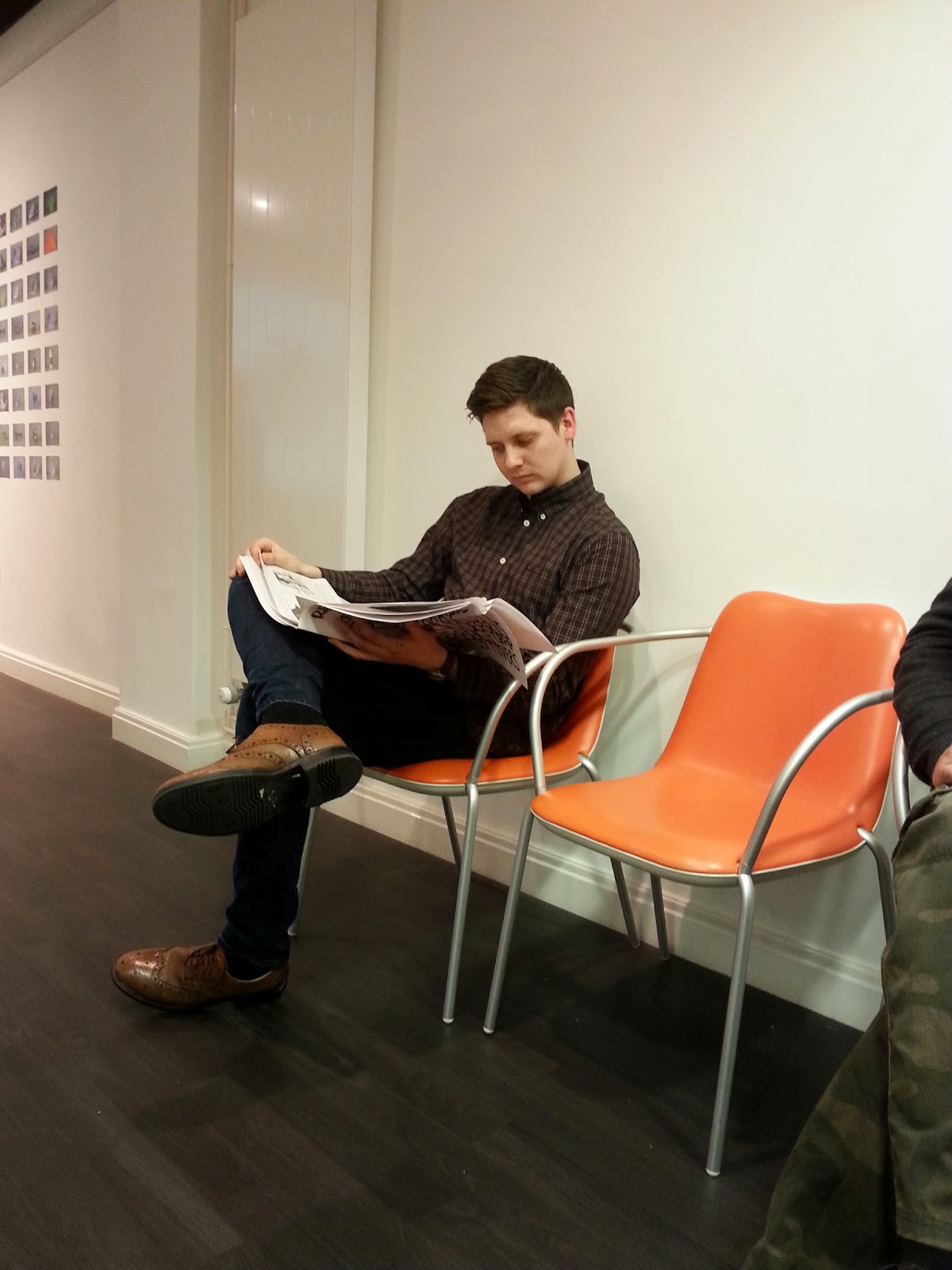 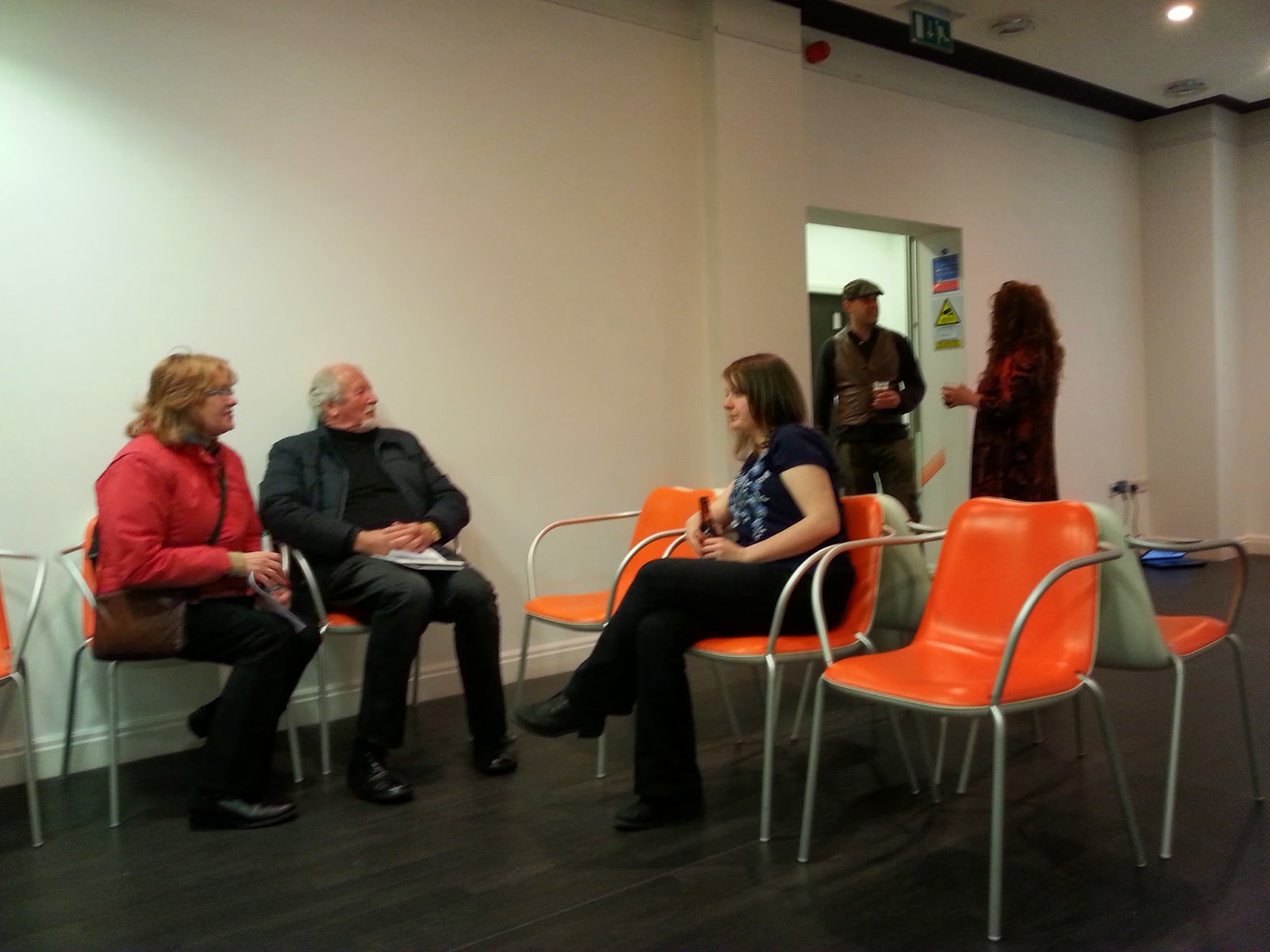 It's possible that I'll go back and talk to a group of students at a later date during the show which could also be opened up to the public too for Rubbish Conversations #2.
Posted by Brown Paper Bag at 07:51 27 comments:


Join Alice Bradshaw for Rubbish Conversations at the opening of the new Museum of Contemporary Rubbish exhibition at Venn Projects, Blackpool, on Friday 14 March 6-8pm.

Guests can drop in at any time over the course of the evening to contribute on any topic concerning crap, debris, detritus, dirt, discards, garbage, junk, leftovers, litter, refuse, rejects, remains, rubbish, ruins, scrap, shit, shreds, trash and waste.

Alice has recently been talking rubbish with Antique's Roadshow's Lars Tharp at the The Hepworth, Wakefield as well as previous interviews with several artists working with rubbish, discards and detritus. 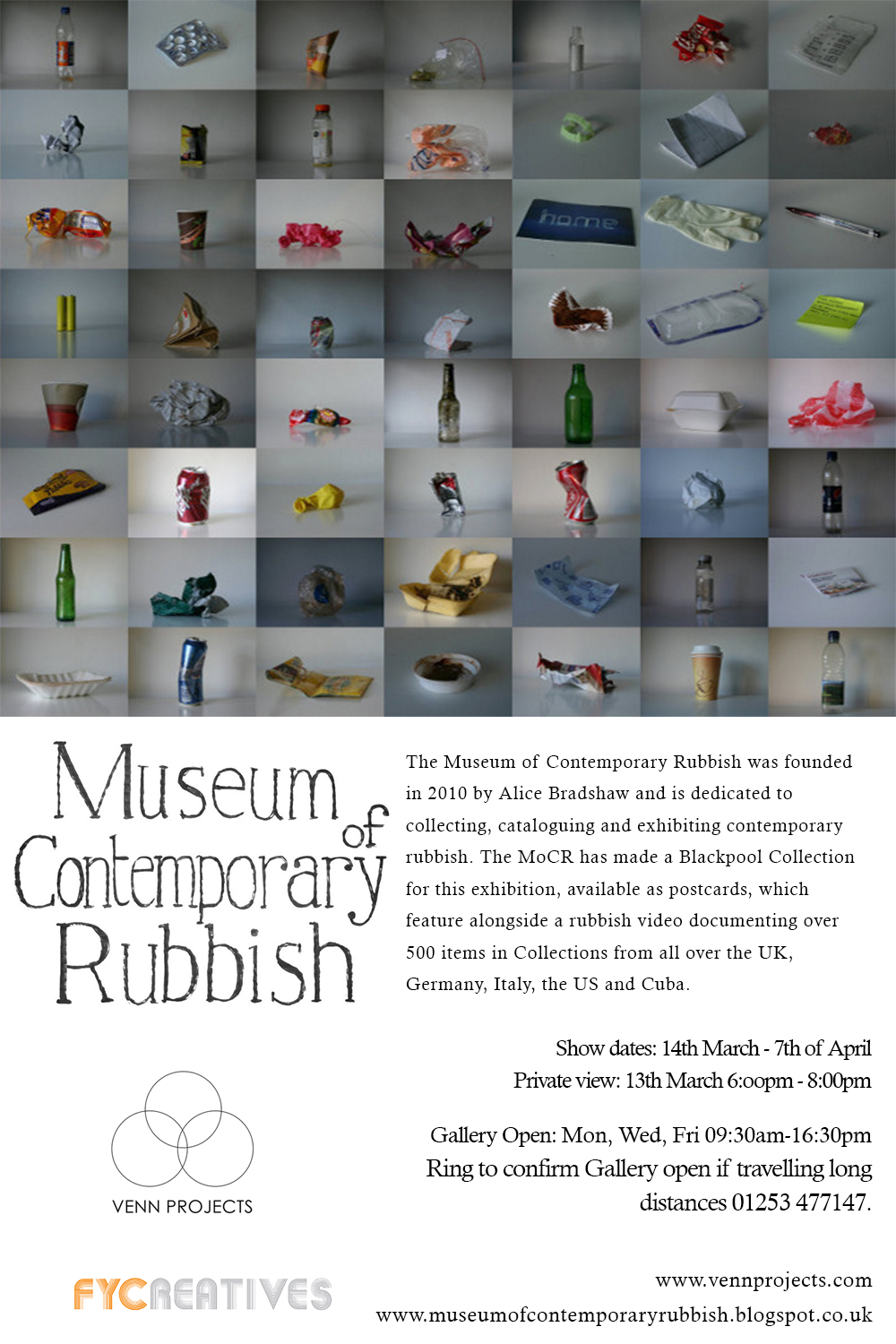 Museum of Contemporary Rubbish has been invited to show at Venn Projects in Blackpool. The MoCR has made a Blackpool Collection for this exhibition, available as postcards, which feature alongside the Rubbish video documenting over 500 items in Collections from all over the UK, Germany, Italy, the US and Cuba.

The newly published Rubbish Newspaper will also available at the exhibition.

Alice Bradshaw has published a Rubbish Newspaper for her practice based MA by Research at the University of Huddersfield. She launched Rubbish and other Crap, Debris, Detritus, Dirt, Discards, Garbage, Junk, Leftovers, Litter, Refuse, Rejects, Remains, Ruins, Scrap, Shit, Shreds, Trash and Waste at Supermarket Art Fair in Stockholm with Paper Gallery in February and it will also be available at the upcoming Museum of Contemporary Rubbish exhibition at Venn Projects in Blackpool, previewing 14 March 2014. 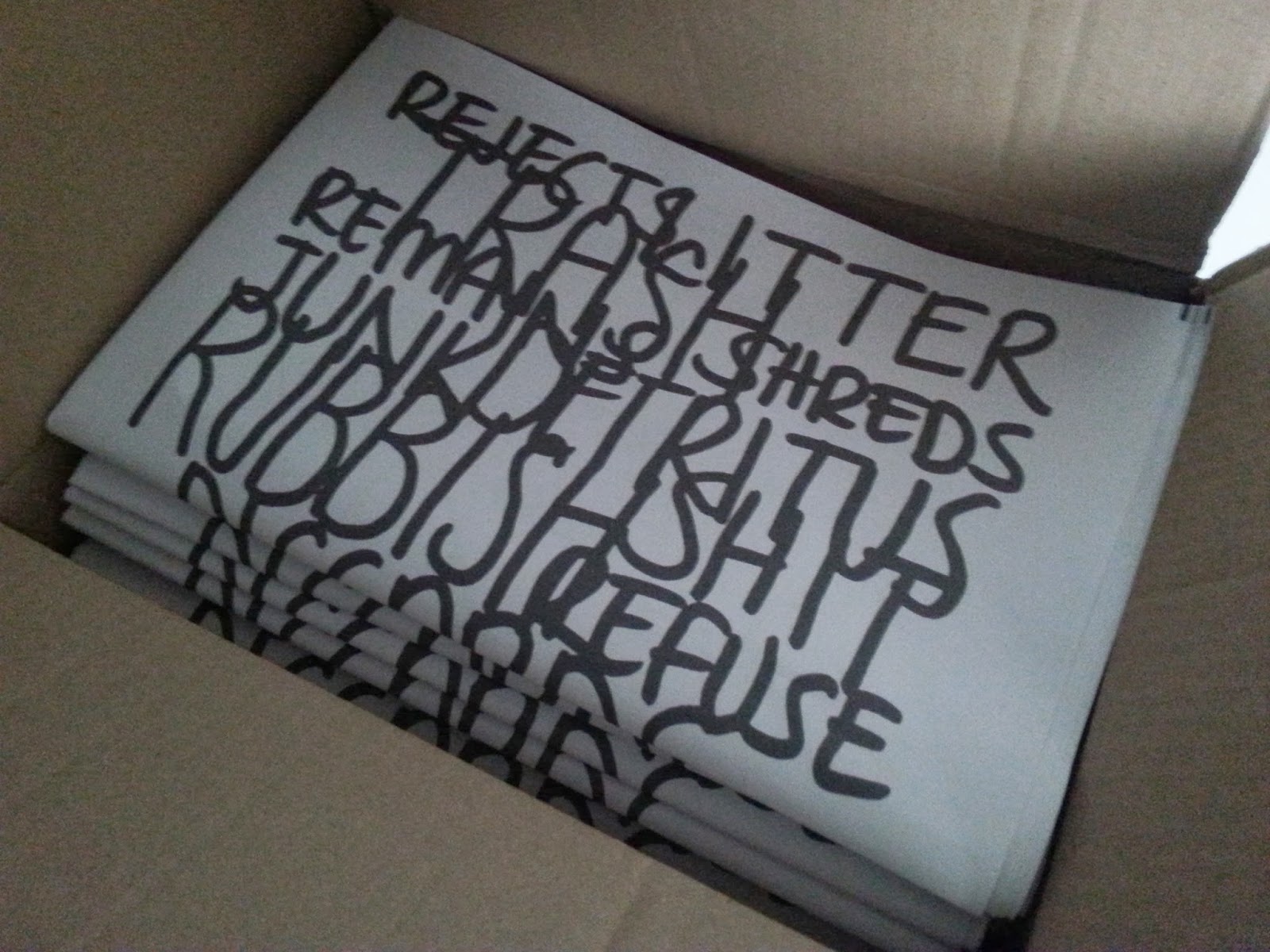 The newspaper is available to download as a pdf (32.4MB) http://bit.ly/rubbishnewspaper2014 and feedback/reviews are invited.
Posted by Brown Paper Bag at 05:53 2 comments:

Worth a Painted Fence

Rubbish Conversation with Lars Tharp at the Hepworth, Wakefield, 10/01/14.

The Hepworth ran an #ICollect this weekend with Lars Tharp and the Museum of Contemporary Rubbish booked onto the Sunday morning session: WHAT IS IT WORTH?: “Ever wondered if you're sitting on a small fortune? Bring in one or two objects from your ceramics, glass or oriental goods collection to learn more from BBC Antiques Roadshow expert, Lars Tharp.”

As Wikipedia details: “Wikipedia Lars Broholm Tharp is a Danish-born historian, lecturer and broadcaster, and one of the longest running 'experts' on the BBC antiques programme, Antiques Roadshow, first appearing in 1986. [..] He studied Archaeology and Anthropology at Gonville and Caius College, Cambridge University.”

Archaeology is, essentially, studying old rubbish and you cannot study rubbish without studying anthropology to some degree, so this was a great opportunity to pick Lars' brains about value, worth and rubbish.

I arrived at The Hepworth, booked in and took my ticket. The Hepworth staff were bemused by my collections and seemed also keen to see what Lars said about the value. The social media guy found me, got some pictures and we had a chat about rubbish in art. He recalled a show he'd seen at the Hayward last summer The Alternative Guide to the Universe with Congolese 'Outsider' artist Bodys Isek Kingelez who makes models of fantastical cities out of cardboard and discarded materials. Another one for the compendium!

Whilst I waited my turn in the room I'd previously curated Pecha Kucha Night Wakefield in a couple of years ago, Lars talked to other collectors about their pictures, glass ornamental vases and the like. People were beginning to fill up the space and as my turn was called he announced he would be speeding up the proceedings to fit everyone in. The following 10 minutes of conversation are transcribed below:

Museum of Contemporary Rubbish has teamed up with Advertising Exhibitions on a new rubbish collection.

Alice has written a brief inviting artists to contribute to a special collection by uploading images of their rubbish related to their practices to the AdEx Gallery.

Rubbish is the rejected, redundant, broken, misprinted, off-cut, used up and consumed. We all produce rubbish from biological matter (see Piero Manzoni's Artist's Shit (1961)) and daily waste like coffee cups, train tickets and newspapers, to household items like furniture and electrical goods that are eventually updated, replaced with a newer, shinier model or break beyond repair. Everything has a limited lifespan, including our own bodies which will too become waste scattered as ashes or buried in the ground one day.

As artists, we often use and re-use materials that other people may regard as rubbish; the found object and the Duchampian readymade are part of many contemporary practices. Some artists work directly with rubbish which is the subject of my current research project (see http://contemporaryrubbish.wordpress.com/ ) and many artists hoard particular materials that have potential to be used in the future.

Artists' rubbish is a specific kind of waste that provides a window into the creative process of each practice. Offcuts are the negatives of production that offer up scraps of detail of the processes involved and misprints and failed experiments provide intrigue into the artist's intention and what would pass the high standards we set ourselves. An empty cup of coffee drank over a chat with another artist might symbolise a breakthrough moment or an empty pack of paracetamol might symbolise too much indulgence at all those previews. Each redundant and rejected object has a narrative about its significance to practice and how it became to be classified as rubbish.

Our rubbish says a lot about us. Criminal investigators, unethical journalists and identity thieves root through people's bins to find evidence of activity and valuable information. Rubbish can also be given new value by others. Cases have been recorded of thefts from artists' studio bins of the likes of Robert Rauschenberg where the contents have been put up for sale without permission and, in 2010, Michael Landy produced Art Bin at South London Gallery where he invited the public to dispose of works of art as a “monument to creative failure.”

Andy Warhol famously never threw anything away that would later become the archives of the Andy Warhol Museum in his hometown of Pittsburgh, Pennsylvania. Working materials, source materials, a personal collection of thousands of collectibles and ephemera, 608 Time Capsules (dated collections of material from the artist's daily life), the full run of Interview magazine, approximately 4,000 audiotapes scripts, diaries, and correspondence form these archives.

Artists' own detritus has been the subject of practices such as Claire Healy and Sean Cordeiro's Deceased Estate (2004), Tracey Emin's My Bed (1998), Richard Dupont's Assisted Head (2011), Amanda Ross-Ho's Restraining Order (2005), David MacRaild's Need Not Want Not (2005) (see DETRITUS), David Shapiro's Consumed (2003), Tom Friedman's Untitled (Eraser Shavings) (1990) (see LEFTOVERS), Marc Quinn's Self (Blood Head) (2006), Hans Schaubus's Remains of the Day (2011) (see REMAINS), as well my own project for HOARD (2012) collecting every item of rubbish from my art practice during 2012 that would have otherwise been thrown away. These artworks deal specifically with artists' shit (detritus/leftovers/remains) – as opposed to other people's shit; providing an autobiographical dimension to the materiality of waste.

As an artist/curator/writer/researcher in artists' uses of rubbish, interested in all of the above and more, I am inviting contributions to a new Artists' Rubbish project for Advertising Exhibitions.


Read the full brief here and contribute to the gallery: http://advertisingexhibitions.co.uk/brief.html
Posted by Brown Paper Bag at 06:25 3 comments: